Bike Ride out in Carmel Valley

No cookies today, sorry. I finished decorating all the Easter cookies for family and friends by working on them til 2am for 3 days and I told my hubby that my reward was that I got to go for an all day bike ride on Saturday. When my alarm went off at 4:30am, I realized what a stupid, stupid person I am ;-) Seriously how many people see their reward as getting up at the crack of dawn to go push your body farther than it wants to go for a very long day? Yes, I do. That is my reward.
It turned out to be a gorgeous day. The temps ranged from 53-85 degrees with a wonderful cool breeze in the hills. It was a long drive to the start of the group ride out in Salinas. Everyone was in good spirits. I think there were about 12 of us on the ride. The beginning of this ride is flat and we had a tailwind and we were just flying. I got chatting with the strongest guy in the group, Ken Emerson, and forgot about my goal of staying toward the back of the group to conserve energy for the long day. At mile 35ish we arrived at Soledad Mission and ate a banana and used the restroom and then headed back out again. About this time we started up a long, gradual climb. It seemed to go on forever. One of my other cycling friends, Lane Parker, said the big climb was at mile 50. I thought he must be wrong. This had to be the climb. I climbed the entire hill alone. There were 3 guys far, far ahead of me (Ken, Dan & Art) that had taken off and the rest of the group was behind. I couldn't see a single person for many miles. I came upon a turn and wasn't sure which way to go. I trusted my instinct and made the turn. Now keep in mind that I have NO instincts when it comes to directions, but I went with it. I then slowed way down hoping that I would find some other cyclists and know that I had gone the right way. Yes, I beat myself up for assuming I would stay with the group and not taking a route sheet at the start. I took my time on the climb and enjoyed the breeze. I came upon a huge possum that was chasing his very long tail. Ick, ick, ick. Really wishing another person was with me at this point.
Eventually John Dektar came along and we chatted a little bit on the climb. Remember that I thought Lane must be wrong about where the hill was in mileage (Lane is NEVER wrong about routes by the way), so I kept telling myself that around the corner, we would summit the hill and be done with climbing. John politely told me how very wrong I was. All this was just pre-climbing and the big hill was indeed at mile 50. Ugh. I decided to stop and eat a power bar since my stomach had already been growling for miles. While I rested and ate my bar, the rest of the peloton went by and I was glad to see my group. The rest of the climb wasn't too bad, but I was definitely struggling. When I did this same route last year, it was about as easy as it could be. I cycled over 9k miles last year and had the strength and endurance from all that training. This year has been a whole different story. I've allowed too many other obsessions hobbies get in the way and it really showed and I felt every pain of the ride.
A couple of us decided to take out two of the extra loops with more climbing and shorten the ride. We enjoyed a nice lunch at mile 72 with the group and then headed out for the last climb. This one was hard. I felt like a slug. I was climbing SO slow. It was frustrating knowing how much easier it was last year. I chatted with Ken and Dan on the hill and Ken tried to get me to chat more. I told him I was busy trying to breathe and he and Dan dashed up to the top easy-peasy. The descent was nice and that's always such a nice reward after a long, difficult climb. At the finish, I changed my clothes and relaxed on the long drive back. I had given out cookies at the start of the ride and told everyone they had to put them in the car and have it as a reward on the way home after the ride. It was a fun day and a real eye-opener of the strength I've lost and need to work to rebuild. I finished the ride with 87 miles, but the rest of the group had closer to 100 miles and more climbing. I'll get there eventually. Great friends to ride with and I couldn't be more blessed.
Lane Parker took these two photos of me during the ride just in case you didn't know why they call me Pinkie ;-) 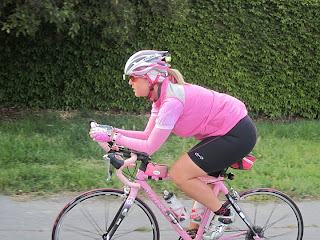 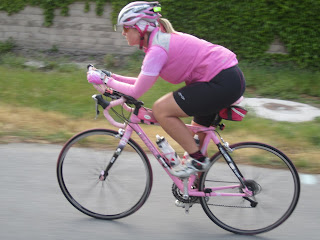