Ever Had A Bad Day? 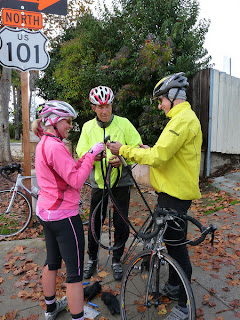 Bad days. We all have them, right? I think the key is how we use them or what we learn from them. Did you take a day filled with lemons and make lemonade? Did you turn that frown upside-down? I try to be positive. I try to always improve myself. Well today was NOT one of those days. Basically God gave me a character building day and I FAILED miserably. Today I was cranky and frustrated and acted like a 4-year old. Not the cute 4-year old that is skipping and smiling, but the 4-year old that is having a temper tantrum. Yep, that was me today. Don't believe me? Well let me paint a picture for you.... imagine this pink-haired gal that often has a big smile and now imagine that gal holding up her pink bike in the middle of a hill and throwing it as far as her tired body will allow. Got the picture?

A couple miles into a climb up a hill today, I felt that my back tire felt odd. I knew I had a flat. I got off my bike and one of the guys I was riding with went to fix my tire and I said no, that I could do it. Now keep in mind that I had a rather difficult weekend thus far and I really needed a "win". Feeling independent and capable was pretty necessary for me at that point to salvage the weekend. So I got out my tools and a new tube and started in. I loosened the skewer, released the break and got my back wheel off. Now at this point it's important to point out that my tires are Michellin Pro 3 race tires. They are not easy to get off and on, even for a man, let alone a weakling gal. I used my tire levers and all my might and I got the tire off. I then felt inside the tire and found where there was a pointy weed thingy (technical term) that had punctured my tube and I cleaned it out.

Well that's when the fun started. I blew into the tire a little bit as I was taught and then I put it back around the wheel under the tire making sure it wasn't twisted and seated correctly. Then I attempted to put the super tight tire back on my wheel. It was really difficult and with a whole lot of groans and upper body strength that I don't have, I finally got the darn thing back on my wheel. I could see that part of the tube was not far enough under the tire and I tried everything, but it would not budge under the super tight tire, so I asked my friends what I should do. One of them suggested that I pump up the tube a little bit and it would probably seat itself. I attached my little pump on and gave it all I had and again and again, but no air was going into the tube. No, the valve wasn't closed - don't even go there and yes, I've made that mistake.

Well then I started worrying that I might have ripped the tube with how much work it was to get the tire back on the wheel, so I again maneuvered the tire off and low and behold there was a small tear in the new tube. My strength was gone from climbing the hill, getting the stupid tire off twice and the stress of holding up the ride. We had a debate over whether I ripped the tube or not. It's certainly possible, but I thought it was interesting that there were about 15 small holes in the bag that the tube was in, probably from rubbing up against the tools in my bike bag. My friend got out another tube and changed the flat while I tried not to cry. He gave me the wheel when it was all back together and I tried to get the wheel back on which I've had pretty good luck with lately, but not today. Confidence was shot, frustration was high and tears were burning behind my eyes. That's when I hurled my bike that I was holding. Yes, it only went about half a foot onto a grassy area, but it still was an insanely childish act.

That was it for me. I was done. I didn't even climb the rest of the hill. We headed back. I can give a bunch of excuses of why I behaved badly on this difficult weekend, but it doesn't matter because my actions and behavior were still unacceptable. I hope to do better next time that God gives me a test. Thankfully the wind was howling and pushing us back really hard and I went up front and worked out my aggression by pulling against the wind. It was a rough day. We finished with 57 miles and lessons learned.